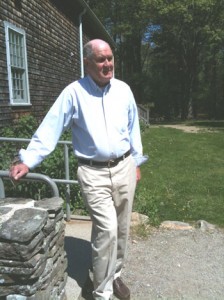 The Norwell Chamber of Commerce announced its Annual Citizen of the Year for 2010, builder Spencer “Skip” Joseph.

The Chamber will honor Joseph at the Annual Norwell Citizen of the Year Dinner next month, at which it will also present a number of scholarships to local students going to college.

According to Ralph Gordon, who provided one of many nominations for Joseph, “While serving the town in … many different positions, Skip has brought a special style of honesty, hard work and willingness to challenge the status quo.  Those who have had the opportunity to serve with him always knew that he loved his home town and would make decisions he believed would best benefit the citizens of Norwell.  He did not shy away from unpopular decisions when he thought they were, in the long run, best interest of Norwell.”

The 16-year Call Fireman veteran and 12-year Advisory Board member earned consistent praise from those who nominated him, including James Boudreau, who said, “Skip was a key contributor to the success of the largest project the town has ever undertaken, the $54,000,000 school building project.  It is no exaggeration to say that he put in hundreds of unpaid hours to be sure that the town received value for its money.  Given his background in construction, this was an invaluable service he gave to our town and schools, and the town was able to bring that project in on budget.”

Many citizens who worked with him during the school building project still quote Joseph’s uniquely expressed understanding of the connection between good schools and property values:  “our schools are our beaches,” he often said.

Among his volunteer roles in the town, Joseph served as Building inspector for seven years, Disability Commission for six years, the School Building Committee for five years, and “many years on the Handicapped Commission, ADA Coordinator and South Shore Vo-Tech Advisory Committee,” said Gordon.

“What hasn’t Skip done for Norwell?” asked Peter and Marybeth Shea, who jointly nominated him.  “He was instrumental in the school building project’s success as well as being a voice for seniors in our town.

“He puts his time, energy, and considerable knowledge towards doing what is best for our community year in and year out,” they said.

“Each year we ask the citizens of Norwell to nominate people that they feel have a track record of volunteerism and public service to the town and its citizens,” said Chamber President Reiko Beach of TRB Designs,” and this year we got a number of highly qualified candidates.  It was a very hard choice given the amount of nominations, the support behind them, and quality of all the candidates; but when you see just how much Skip has contributed over the years, there is no doubt that he truly, deeply deserves this honor.”

Calling Joseph “a tireless supporter of the South Shore Vo-Tech, … who spends countless hours” assisting departments such as the Council on Aging to manage and plan building projects, Boudreau added, “I have rarely met a person who is as devoted to his hometown and its well-being as Skip Joseph.”

The list of service contributions that Joseph has made over the years includes:

And “many years” on the Handicapped Commission, ADA Coordinator and South Shore Vo-Tech Advisory Committee, according to data provided in his nomination papers.

“It’s hard to imagine anyone in Norwell who has served in more volunteer positions for as long a duration as Skip,” wrote Ellen Allen in her nomination.